Sowing-2022 under shelling in numbers 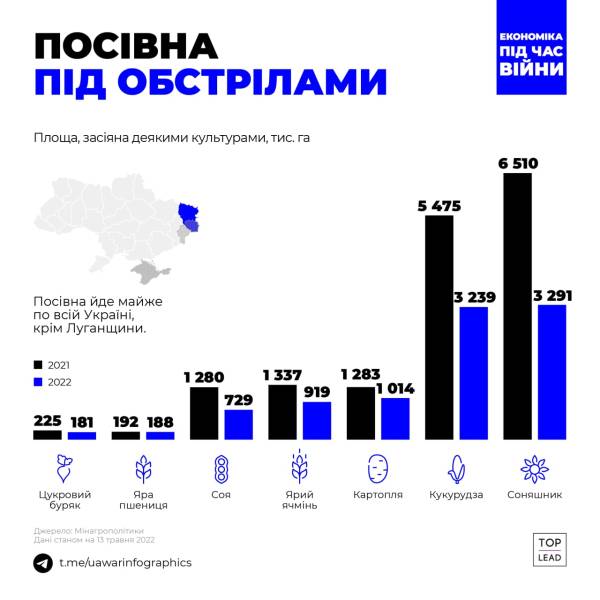 Ukrainian farmers are literally sowing under fire. They have to wait for demining fields. So this year, less is planted than in 2021. Unfortunately, exports will definitely be lower due to hostilities and blocked ports.

By its aggressive actions, Russia is attacking not only Ukrainians. According to the UN, due to the sharp decline in food exports from Ukraine in many countries, food prices will rise, and hunger could threaten one in five people on Earth. At the same time, Ukrainian farmers in the border regions are now forced to work literally under fire.

Today, the sowing campaign takes place almost all over Ukraine, except in the Luhansk region. The projected area in the territory controlled by Ukraine is 13.65 million hectares, which is 3.27 million hectares less than last year (16.92 million hectares).

View the infographic from the cycle "sowing under fire."

This year we managed to sow spring wheat with an area of ​​188 thousand hectares, and last year - 192 thousand hectares. For example, in 2022, Volyn farmers will reduce the sowing of industrial crops instead of increasing spring wheat sowing to have grain. This year is a long spring. However, farmers invest in sowing dates. April precipitation also contributed.

Before Russia's full-scale invasion of Ukraine, grain market analysts predicted an increase in soybean acreage. One of the stimuli that would help develop the legume industry in the country could be access to the Chinese market. But unfortunately, the war ruined all the plans of Ukrainian farmers. In 2021, soybeans were sown on an area of ​​1,280,000 hectares. Unfortunately, only 729 thousand hectares were planted this year.

This year Ukrainian farmers sowed 919 thousand hectares. Although last year the area under spring barley was 1,337,000 hectares. According to the results for 2021, Ukraine exported 5.7 million tons of barley, which is 12% more than the previous annual figure.

The blocking of Ukrainian seaports by the Russian army and the low capacity of alternative export routes threaten the possibility of exporting the grown crop. This can lead to the impossibility of further activities of Ukrainian farmers. The domestic fund for barley consumption is much smaller than the amount grown, and a lack of funds from sales will lead to financial insolvency and a significant barley shortage on world markets.

In the Ukrainian market, 98% of potatoes are grown on their homesteads by citizens, and industrial enterprises produce only 2%.

Unfortunately, Ukrainian farmers are reducing the sown area under corn this year. There are several reasons for this: the high cost of drying, leftovers from last year's products, logistics problems, etc. Instead, agricultural enterprises prefer crops that are easier to sell on the domestic market.

In today's reality, Ukrainian farmers are helping the Armed Forces to defend their fields with one hand and sowing with the other. Thoughts on how to care for and grow, how much will grow, and whether there will be fuel to collect the harvest. And everyone is thinking about victory, peace and food prices.

The main thing is the belief that despite the aggression, Ukraine will not only be able to provide itself with food but will also remain a significant player in the world food market.